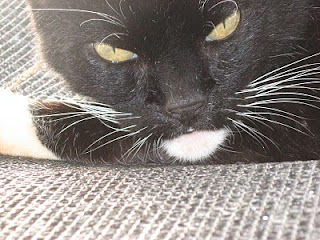 his name was peewee .he was with us 19 people years. he was found by my husband at a job site  just days old .
when his eyes opened and he was cleaned up he stole our hearts.
about ten years ago i got a pair of litter mates  because i though it would be different to have regular cats raised and socialized by their own kind. peewee didn't agree and disappeared for months . turns out he was just next door and he didn't like kittens and returned  when they were months older.
when we moved he held out three weeks in the surrounding woods before returning to the fold. he clearly had ideas and standards.
he liked NPR radio, tuna , and sunset walks with us and the other cats. 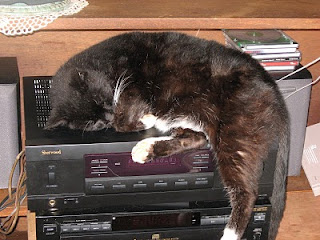 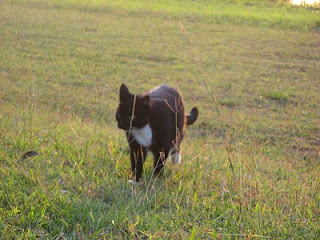 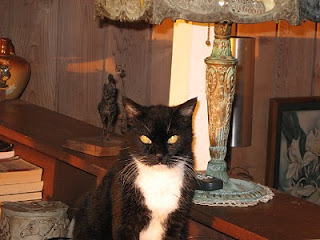 he had been declining in health the in last year, rarely leaving the deck.
he was last seen walking down a grassy slope 3 mornings ago .
"he who must be obeyed" will be missed.
Posted by sonja at 7:28 PM

Oh Sonja, I'm sorry. Find comfort in the fact that no kitty on the entire planet had a better life. They just don't live long enough.
RIP, Peewee.
Love,
Me

Sorry to read about your loss dear Sonja, of course he will be missed,even if you have more than one cat you will always think at him, memories nobody can take from you.
Hugs Anni

Pee Wee was Mr. Independence to the end. I'm sorry for the loss. Pets are such a great comfort, and entertaining to say the least.

thank you TR,Anni,and Nancy for your kind words.

I left a message here the other day but i don't know where it went. I am sooo sorry about Peewee. I know how much he was a part of your life and how hard it will be without him. Even though he lived a really long time and had the best possible life, of course you'll miss him. You'll still have your memories and Peewee will still be here, immortalized in all your art.

thank you Kathy for your encouraging words. he left much like he arrived. walking through the wet morning grass....

So sorry for your loss. This is the exact same day I lost my 21 year old kitty, Doucette, a year ago. Still miss her I suppose I always will.

each of of our animal companions brings special gifts of laughter and joy to our lives. my studio is not complete with out a sleeping cat in a basket of cloth that is one size too small....Doucette lived a long life!

Happy New Year Mary! he was one of the unforgettables in our 4 legged family, forsure!