Peaches and some new year chicks 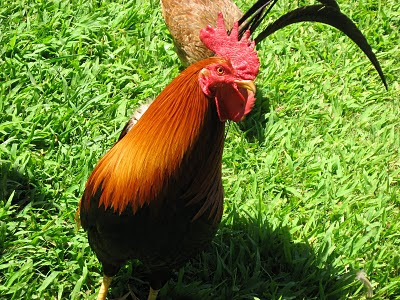 this handsome fellow is Peaches the rooster. he was hand raised and thought he was people for a short time. for a while he jumped up in laps, dinner plates when we were out on the deck eating, and in my hammock while i was reading, he actaully like to hear me read aloud , and he even took naps in the hammock with and without me in his youth.
for months he lived in a cat carrier until he got a bit larger and brought a girl friend home one evening.  with barely enough room for him in the carrier at that point ,  the next night he stayed out. and the next in the carrier and so on until he made the successful transition to the tree with other chickens. good . he was getting much too large for the carrier . for months he would show up at dusk and jump in my lap so i could put him in for the night...we are glad he is normal rooster, for the most part tho he still walks along side of me and mutters at times....chickens also eat all bugs and centipedes and insects and lizards they can catch. that is a plus. they also eat all table scraps and veggie trimmings .

this January chickens are already hatching out in clutches and mommies are hovering about with little peeps under their feather skirts at rest. they are so sweet and so many! we collect the eggs, when we can find them, sell and give them away and make alot of deviled eggs for snacks.

Posted by sonja at 1:22 PM 6 comments: Links to this post 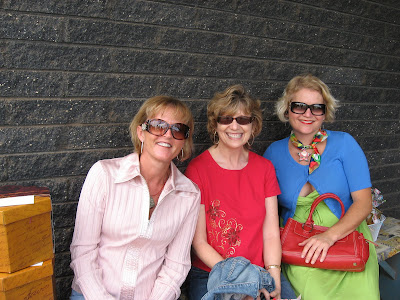 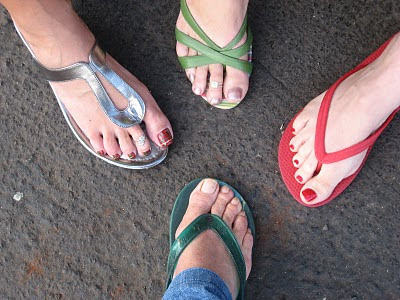 AT least twice a year, which is not nearly enough, 3 of my artsy and funtastic gal pals and myself have lunch at a local watering hole. i bring the camera usually so that i can take pictures and not be in them or because i see a photo op in the parking lot. well, i usually paint my toes but these gals are townies and they really know how to glam up the toe nails. i am the country mouse and paint my toes usually to cover a bruise as a bar of soap falling in a shower can cause. not this year. not yet. bare toes into the new year i go. and in rubber slippers too. hey , they are new and i can paint on them and have to keep them from walking away on someone elses feet as it is most common here to leave the slippers out side the home before entering.
hang 20 here!
Posted by sonja at 1:03 PM No comments: Links to this post